The Board of Directors meet in
January and July.


Biennial Meetings are held in even numbered years and are open to those who own gravesite(s) in the cemetery or have family members buried there.

The next Biennial Meeting is scheduled for Thursday, July 23, 2020 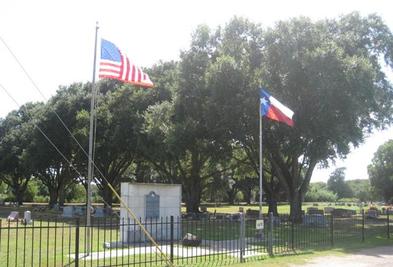 San Felipe de Austin was established in 1824 as the community and administrative headquarters of Stephen F. Austin's original Anglo American Colony in Texas.  The site for the Township was chosen by Austin and the Baron Felipe Entrique de Bastrop.  The original 1824 Mexican charter for San Felipe de Austin contains a survey which set aside this site for cemetery purposes.  Although the earliest documented interment is that of Elisabeth J. Eidman in 1846, historical references to earlier deaths in the community suggest burials here prior to that year.  The cemetery consists of a fenced Anglo section containing about 370 grave sites and an adjacent, separately fenced, African American section containing an estimated 200 grave sites.  At least three of which are known to those of former slaves.

From the time of its establishment in 1824, San Felipe de Austin Cemetery was maintained by the Town of San Felipe de Austin until 1966.  Since that year the town has added land to the cemetery and transferred its ownership and care to two community Cemetery Associations comprised of descendants of persons interred here.  Many of this area's early pioneers and leaders are buried here. 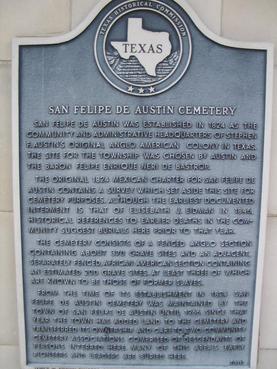